So I have had a fairly  interesting summer: I had knee and shoulder surgery in a 16 day period. First was the right knee, then 16 days later I had left shoulder surgery.  This allowed for a unique “experiment” that I got to run on myself.  On the first surgery I followed the advice (mostly) of the doctors, and on the second surgery I did not follow the advice of the doctors. So this blog will tell you how the two recoveries differed, my protocol, and thoughts about how things were going and other randomness.

*Please note. I am not trying to bash conventional medicine, it obviously is basically magic (seriously, describe it to someone from 299 or even 99 years ago. They would think you were lying).  I also am not suggesting anyone follow this in any way….listen to your doctors! Keep in mind: shoulder and knee surgeries are different, I don’t know if my knee would’ve been better on my protocol or not, and I don’t know if my shoulder would’ve been worse/better/same on protocol from docs.  Please don’t fall into the trap of coming in hating “the man” and just cling to the non-traditional things I tried. I have not proved anything. I just like experimenting on myself, and like being part of a discussion I simply decided to experiment, because discussion is the best way to figure things out along with trial and error. Whether that was smart or not…well read it.

Firstly: WTF happened that I would need surgery? And what was done

Ok-so that’s what I was dealing with, I know, who gives a shit…but I wanted you to hear my sob story.  So here was the suggested post op treatment from Medical people:

So, for the knee, I did just what was told of me. Except the crackers and sugar water-WTF? I had a steak and eggs instead. The ice I was using felt worthless because the knee bandages were so thick that it took the whole hour to get cold (for the first 2 days at least, then once the bandages were gone it was cold as ice. You know, because it was ice). As far as diet goes, I was 100% primal, whatever that means (for me it means no veggies oils, no gluten, no added sugar*except ice cream during that first surgery*).  My knee got pretty swollen and awfully painful.

The knee actually got drained after this photo, because I couldn’t move it due to the swelling/pain. I continued with the toradrol for the 5 days it was rx’d for (that’s the maximum legally allowed because it might shut down or damage my liver/kidneys/stomach etc) and continued with the norcal for 8 days post op(norcal=opiod and tylenol combo, they put a ton of tylenol in there so that it can’t be used recreationally or else you’d suffer serious liver damage).  I also kept icing it frequently, and did so for the 20-30 minutes suggested, this time it got really cold because there was no wrapping.  I was on crutches for 4.5 days. The doctors thought I was doing quite well compared to other people, as in my pain seemed less and swelling was less than normal.  I however thought I could do better.

For the shoulder, let me discuss the instructions from the medical community from above-and then say what I did.

Ok, here is the supplement protocol I did starting 4 days before the second surgery on some, and some started day before the first surgery. Some influence from this. 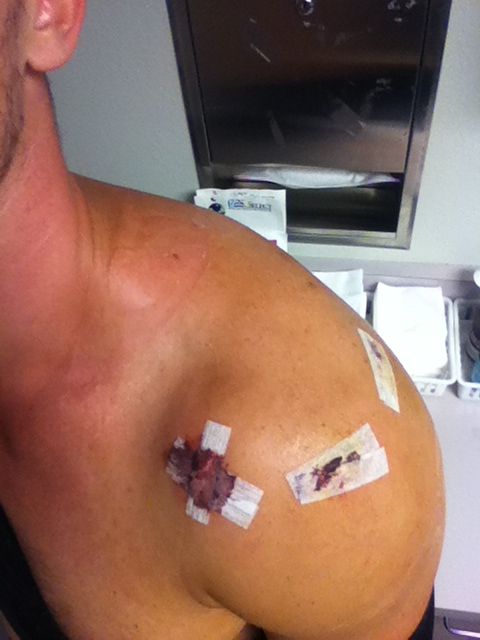 yummy, but no real swelling.

So, you’re wondering, how did the shoulder respond? It basically did not swell-nothing in the hand or arm—compared to the knee where I had swollen foot, toes, and ankle (I iced those too, btw). The incisions on the knee took 2 weeks to fully close on two of the cuts, and one cut today, 4 weeks post op still has a small scab.  The incisions on the shoulder aren’t even noticeable on two of the cuts, and one has a minor scab on the very end of the cut. I keep lying to the physical therapist who asks me if I’m icing, because I’m not. Today I did weight assisted pull-ups at the gym, and that is 12 days post op. This past weekend I had the pleasure of walking around the perform better summit surprising everyone there that I wasn’t limping or in a sling. Hooray for technology, hooray for eating well, and hooray for getting to talk to Gray Cook, Dallas Hartwig, K-Starr, Jon Fass and Doc Cheng regarding the injury and healing.

What now? Physical therapy (and finishing 2 months of that supplement protocol). I have seeked out a class 4 laser in san diego, and am doing the pt at that clinic.  I am supplementing the protocol they give me with my own plan: crawls, carries, and getups supplemented with mwodding, FMS correctives, and manual therapy.  These are developmental movements, surgery changes your body-and I want to develop it back the way it is supposed to, not with external rotation band drills.  I’ll be putting my limbs in place on the ground and moving my body around those fixed points the way that babies do, that’s why I did weight assisted pull-ups and crawling-there is just a fundamentally different way that the body and brain reacts to moving the way we do instinctively vs isolation of muscle actions drills.