The recent new article about Hope Solo being told she was “too muscular” for dancing with the stars got me annoyed, so I’m venting a tad. What demographic is DWTS for? Women.

I’m not gonna write about why women should put down the little weights and lift bigger weights-plenty are doing that already. JC Deen, Girls Gone Strong, Strong is the new Skinny, Rachel Cosgrove, Nia Shanks – that’s good for now-but there is lots more out there.

Instead I wanna touch on all the silliness about how women should look, how they think they should look-and what things are big influencers.

First, I think it’s complete bullshit that men are generally made the evil enemy in why women are “pressured” into trying to be skinny etc. I’ll agree that marketing campaigns can objectify women (beer, cars, etc)-but the idea that it is just for men is silly. Women’s magazines show the same ads, portray skinny chicks as their models, and do more to keep the negative body imagine problem alive than men’s magazines do. Check out this quote

The Culture of Thinness

Researchers report that women’s magazines have ten and one-half times more ads and articles promoting weight loss than men’s magazines do, and over three-quarters of the covers of women’s magazines include at least one message about how to change a woman’s bodily appearance—by diet, exercise or cosmetic surgery.

In addition to this-let’s stop and think about our own lives, people in our lives, and who we are really trying to look good for. I say we, because men and women both are doing all the primping, beautying, and readying for women’s’ opinions. Example: Had a cousin of mine tell me about how proud she was that she was recently complimented on her legs. I said “cool, from a girl or guy?” to which she replied “a girl, and so it meant more”. Yep-just as I suspected. Yet we men are blamed for this obsession with how you need to look when in fact you are mostly trying to impress your friends and other women you don’t even know….and men are called too competitive. Ha. I’m not even trying to pull references for this past paragraph-it’s fact and you know it. Stop ONLY blaming men, no matter how you look there are lots of men who are going to hit on you. Even if it takes a couple beers 😉 Bottom line: women are the bigger influencers in regards to creating body image problems. **

Continuing, my biggest irritation is that in the “fitness” industry we have so much shitty information for women to follow. A very very cool movement is the one that is encouraging girls to lift heavy, and not be stupidly afraid of bulking up. Again, see the first paragraph for many links which will take you to loads of good articles about this. Even still, We get knuckle head trainers telling girls that they should only train with small weights because that’s what ladies do, we have all the silly ass “shape” style magazines which only show women lifting silly ass little pink dumbbells, we have this type of article (note the comments). Now, Check out this Men’s Fitness survey (78% say athletic or curvy) of what is mens’ ideal female body type-it 100% correlates with my 29 years of talking with other dudes about what we like in women. AND hey you shallow ladies….I bet that the men who like fit (not saying skinny) girls are in fact generally fit and attractive themselves. Basically this survey shows we are attracted to women with small waist to hip ratios-note the key word being ratios. This article over at Evolvify discusses attractiveness more smartly than I do-read it.

Now, don’t take this “we don’t like skinny” talk to mean that we like fat. Nobody really likes fat, (and when i say fat i mean obese-not thick) I’m just being honest here- no matter how much that may be getting to be politically incorrect (another article entirely would be our culture’s stupid ass acceptance of unhealthiness-which is hugely influenced by people becoming huge). What we men do want are fit and healthy women. And healthy comes in a variety of shapes, ranging from thinner, to thicker. In fact check out the urban dictionary definition of thick – not fat, not skinny, but just right. healthy means so much more than scale weight (nobody cares about this by the way, except you girls). Healthy means skin firmness, color, and “glow”. I mentioned in my recap of the Ancestral Health Symposium how generally hot and healthy all the people were there-so basically eat healthy and don’t train like assholes. Fit and healthy shows a respect for one’s self, and that’s attractive. Healthy means mentally healthy-and worrying about losing lots of weight and trying to impress your friends isn’t healthy, and that’s why strong and fit girls are so damn awesome-they gain confidence from actually getting strong in the gym, from actually having the ability to change how their bodies look-they gain confidence by taking ownership of how they look and how they want to look rather than relying on everyone else-and that’s sexy.

I’d also like to point out that I’m not even trying to say “lift heavy no matter what”. If you don’t want to, you don’t enjoy it, or it scares you, then please do whatever it is that makes you happy. Just understand that what you are doing MAY not yield the results you want.

Now ladies, please go do the following things: work up to going heavy for 3-5 on deadlifts and squats. Do more volume with hip thrusts, lunges, step ups, and KB swings. Do pushups, pull-ups, dips, horizontal rows, and press weight overhead. Go for hikes and walks, and do sprints every so often. Go to pilates/barre/dance/zumba if it’s fun. Enjoy yourselves! That’s all you need to do. Don’t get fancy, get strong. Like Jessica Biel (who got voted as too muscular on this site-which I don’t like as IMO it perpetuates the bulky fear). 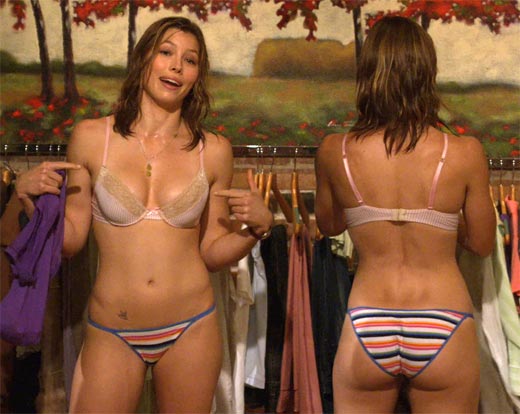 This is healthy. It’s from film, so its not photoshopped. Biel works her ass off (well on it seems) in the gym.

Also read this, as it’s uncomfortably hilarious and much more brutal than what I wrote. http://www.forgingelitesarcasm.com/2011/12/about-your-female-body-issues.html

**Note here-the sites and groups dedicated to accepting obese people for who they are, are in my opinion borderline stupid. Enabling a fat, unhealthy life is ridiculous. http://beastmodaldomains.com/2011/11/09/fat-acceptance-is-unacceptable/ (note, this is too extreme to be helpful…but still I’m linking it-because most of what he writes is hilarious)

Editor’s note: i don’t edit. this is an unprofessional blog.